Ode to my boots

It has been so long since I posted here. In that time, sooooo much has happened in my little world. I did a Kickstarter, which was successfully funded. I finished a Tarot deck (which took 10 or 13 years to complete, depending on how you look at it). I wrote a book. I published the deck and the book and shipped them all out myself. (And I’m a Mom, a small business owner, sometimes even in a relationship, and I have amazing friends – pretty full plate). How fortunate am I to be able to say that? As I write this, I recognize just how incredible my life is.

So why do I feel so…down?
I am struggling so much, emotionally these days. I admit it, I have a mood disorder, (or chronic depression), whatever you want to call it – so the melancholy is not unfamiliar territory. I manage it the best I can through exercise, meditation, supplements, diet, journaling, art, friends, family, cat… But also, a lot of things are up in the air right now. There are many losses, and navigating them is proving difficult. The biggest thing, which you wouldn’t expect it to be a loss, but it actually feels like it is – was the completion of my Tarot deck.

I began my first deck in 2006. I have orbited around the idea of making/and actually been in the act of making a Tarot deck since 2006. Consider that for a minute – where were you in 2006? As fate would have it, that first deck, which taught me how to be an artist, as it neared completion, was destroyed in a great computer crash. When I finally began again, it was 2008. So the Dreamkeepers Tarot took me 10 years exactly to create. Even when I wasn’t consciously making the deck, it WAS the thing I was orbiting around. And now, with it finished, without the gravitational pull of that very solid idea, I feel lost in space. Wow, I hadn’t made that metaphor before, but it’s exactly how I feel! Lost…in space.

Because I am a fighter, have been taking steps to get back to work, though. Yesterday, in fact, I spent the entire day piecing together a new tableaux. So far, the idea is a bit convoluted, but I think there’s something good there. Something solid. I think this is my way of testing the waters again, of processing where I am and considering where I want to go artistically (since there are really no parameters, except for what I think people expect, and what I expect of myself, both tricky things to navigate).

My daughter will be leaving home for college in August. Emotionally, I am already preparing for this. She has a very full life outside of me, so on some level it already feels like the separation is happening. Another gravitational pull that has diminished in nature. Everything is so fleeting, looking too long at what is changing can be disorienting, so I search for an anchor. Historically, that anchor was my art, but the art is new now, too. I feel like I need something tangible, something that tells me in this moment of transition who I am, and where I stand.

The question plagued me for the better part of this afternoon. “I have nothing”, I kept telling myself. Nothing. (I told you I’m in a bit of a depression) Nothing Nothing Nothing Nothing other than the shoes on my feet…
Then it hit me. The shoes on my feet! My 20 eye Dr. Martens which I’ve worn most days for a handful of years now. They are my beloved companions, and I must introduce you to them. I have replaced the zippers on them so many times that I no longer chance the zipper and instead lace and unlace them every time. These boots have carried me through more heartbreaks than I care to remember. They have moved me from 4 different addresses, 3 art studios, and held me as I work day after day in my shoppe. They have carried me across Paris as I wandered her cobblestone streets alone. We clocked miles inside the Musee D’Orsay, wandering from one exquisite painting to the next, took the steps on the grand staircase of the Opera Garnier, and stood in the home of Gustave Moreau (which is now a museum of his works). We walked together under the light of the full moon as I met a beautiful man after-hours in a taverna in Crete. We walked the hill of the Acropolis, visited the oracle in Delphi. We saw Frida’s house, took to the streets of Mexico City alone in the dawn, and hiked up to the tops of pyramids. We got lost together on the muddy path leaving Macchu Picchu, and trudged through the Amazon jungle to take in the view high above the lost lake.

They have taken so many steps with me that the tread on the bottom is practically nonexistent, and I have to step very carefully in the rain. This does not deter me, mind you. I still wear them almost daily. When I take them off, I swear they still carry my presence. I would ask to be buried in these boots (unless someone who loves me wants to keep them to remember me by). I have tried unsuccessfully many times to replace them, but they are not manufactured often it seems, and so I have yet to find a new pair. I still wear them down, day by day, step by step. Oh, if there was one thing to bring me out of my depression and into a place of gratitude, it is this, my beautiful, world traveled, weather beaten boots.

Thank you for reading. 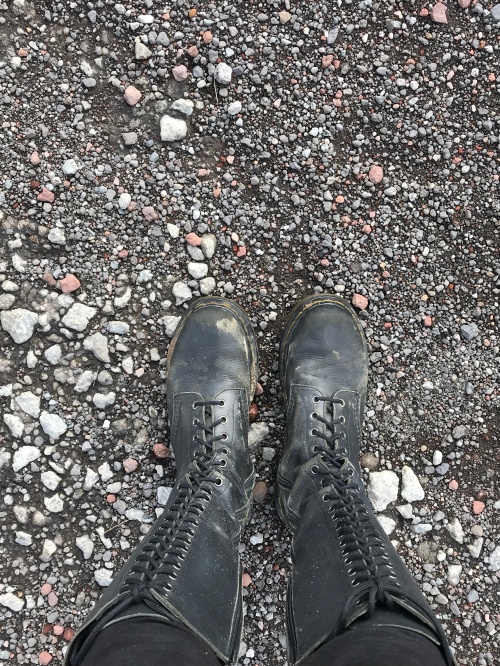